YELLING, scheming and sabotaging: all are tell-tale signs that a bully is at work, laying traps for employees at every pass.

Skip to next paragraph
Enlarge This Image

During this downturn, as stress levels rise, workplace researchers say, bullies are likely to sharpen their elbows and ratchet up their attacks.

It’s probably no surprise that most of these bullies are men, as a survey by the Workplace Bullying Institute, an advocacy group, makes clear. But a good 40 percent of bullies are women. And at least the male bullies take an egalitarian approach, mowing down men and women pretty much in equal measure. The women appear to prefer their own kind, choosing other women as targets more than 70 percent of the time.

In the name of Betty Friedan and Gloria Steinem, what is going on here?

Just the mention of women treating other women badly on the job seemingly shakes the women’s movement to its core. It is what Peggy Klaus, an executive coach in Berkeley, Calif., has called “the pink elephant” in the room. How can women break through the glass ceiling if they are ducking verbal blows from other women in cubicles, hallways and conference rooms?

Ask women about run-ins with other women at work and some will point out that people of both sexes can misbehave. Others will nod in instant recognition and recount examples of how women — more so than men — have mistreated them.

“I’ve been sabotaged so many times in the workplace by other women, I finally left the corporate world and started my own business,” said Roxy Westphal, who runs the promotional products company Roxy Ventures Inc. in Scottsdale, Ariz. She still recalls the sting of an interview she had with a woman 30 years ago that “turned into a one-person firing squad” and led her to leave the building in tears.

Jean Kondek, who recently retired after a 30-year career in advertising, recalled her anger when an administrator in a small agency called a meeting to dress her down in front of co-workers for not following agency procedure in a client emergency.

But Ms. Kondek said she had the last word. “I said, ‘Would everyone please leave?’ ” She added, “and then I told her, ‘This is not how you handle that.’ ”

Many women who are still in the work force were hesitant to speak out publicly for fear of making matters worse or of jeopardizing their careers. A private accountant in California said she recently joined a company and was immediately frozen out by two women working there. One even pushed her in the cafeteria during an argument, the accountant said. “It’s as if we’re back in high school,” she said.

A senior executive said she had “finally broken the glass ceiling” only to have another woman gun for her job by telling management, “I can’t work for her, she’s passive-aggressive.”

The strategy worked: The executive said she soon lost the job to her accuser.

ONE reason women choose other women as targets “is probably some idea that they can find a less confrontative person or someone less likely to respond to aggression with aggression,” said Gary Namie, research director for the Workplace Bullying Institute, which ordered the study in 2007.

But another dynamic may be at work. After five decades of striving for equality, women make up more than 50 percent of management, professional and related occupations, says Catalyst, the nonprofit research group. And yet, its 2008 census found, only 15.7 percent of Fortune 500 officers and 15.2 percent of directors were women.

Leadership specialists wonder, are women being “overly aggressive” because there are too few opportunities for advancement? Or is it stereotyping and women are only perceived as being overly aggressive? Is there a double standard at work? 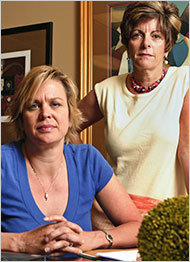 Michelle Cirocco, left, and Donna Kent of Televerde, a company in Phoenix that set up call centers at a state prison.

“Women are trying to figure out the magical keys to the kingdom,” said Laura Steck, president of the Growth and Leadership Center in Sunnyvale, Calif., and an executive leadership coach.

Women feel they have to be aggressive to be promoted, she said, and then they keep it up. Then, suddenly, they see the need to be collegial and collaborative instead of competitive.

Cleo Lepori-Costello, a vice president at a Silicon Valley software company, came to the center for training. She got off to a bumpy start when she stormed into her new role “like a bull in a china shop,” Ms. Steck said.

In gathering feedback about Ms. Lepori-Costello, Ms. Steck heard comments like: “Cleo is good at getting things done but may have come on too strong in the beginning. She didn’t read the different cultural unspoken rules like she could have.”

So Ms. Steck and Kent Kaufman, another coach at the center, began a one-year, once-a-week individual coaching program. It included role-playing and monthly group discussions with other female executives who acknowledged that they also had major blind spots about being politic at work. (The group was once nicknamed the Bully Broads.)

When she came to the center, Ms. Lepori-Costello said, she thought her colleagues were not initially open to her ideas. Through coaching and conflict role-playing, she came to realize that her behavior was perhaps “too much overkill” and that she was not always attending to all the people around her.

Joel H. Neuman, a researcher at the State University of New York at New Paltz, says most aggressive behavior at work is influenced by a number of factors associated with the bullies, victims and the situations in which they work. “This would include issues related to frustration, personality traits, perceptions of unfair treatment, and an assortment of stresses and strains associated with today’s leaner and ‘meaner’ work settings,” he said.

Mr. Neuman and his colleague Loraleigh Keashly of Wayne State University have developed a questionnaire to identify the full range of behaviors that can constitute bullying, which could help companies uncover problems that largely go unreported.

Bullying involves verbal or psychological forms of aggressive (hostile) behavior that persists for six months or longer. Their 29 questions include: Over the last 12 months, have you regularly: been glared at in a hostile manner, been given the silent treatment, been treated in a rude or disrespectful manner, or had others fail to deny false rumors about you?

The Workplace Bullying Institute says that 37 percent of workers have been bullied. Yet many employers ignore the problem, which hits the bottom line in turnover, health care and productivity costs, the institute says. Litigation is rare, the institute says, because there is no directly applicable law to cite and the costs are high.

Two Canadian researchers recently set out to examine the bullying that pits women against women. They found that some women may sabotage one another because they feel that helping their female co-workers could jeopardize their own careers.

One of the researchers, Grace Lau, a Ph.D. candidate at the University of Waterloo, said the goal was to encourage women to help one another. She said: “How? One way we predicted would be to remind women that they are members of the same group.”

“We believe that a sense of pride in women’s accomplishments is important in getting women to help one another,” Ms. Lau said. “To have this sense of pride, women need to be aware of their shared identity as women.”

In the workplace, however, it is unlikely that women will constantly think of themselves as members of one group, she said. They will more likely see themselves as individuals, as they are judged by their performance.
Page 3 of 3)

“As a result, women may not feel a need to help one another,” she said. “They may even feel that in order to get ahead, they need to bully their co-workers by withholding information like promotion opportunities, and that women are easier to bully than men because women are supposedly less tough than men.”

Skip to next paragraph

WHAT better place to be a bully than in a prison? Even so, that is exactly where Televerde, a company in Phoenix that specializes in generating sales leads and market insight for high-tech companies, set up shop. About 13 years ago, the company created four call centers in the Arizona state prison in Perryville, employing 250 inmates (out of 3,000).

Through immersion training, mentoring and working with real-world clients, these women can overcome their difficult circumstances, said Donna Kent, senior vice president at Televerde. “Often, they will win over bullies and we see the whole thing transform. That’s what gives us inspiration and our clients inspiration.”

TODAY, about half of Televerde’s corporate office is made up of “graduates” from Perryville, including Michelle Cirocco, the director of sales operations. She has seen how women treat one another in other settings and she thinks the root cause is that women are taught to fight with one another for attention at an early age.

To be sure, the Televerde experience is not for every inmate, and those who are in it still must work hard to maintain a highly competitive position.

Televerde reversed that attitude in Perryville, Ms. Cirocco said, by encouraging women to work for a common cause, much like the environment envisioned by the Canadian researchers.

“It becomes a very nurturing environment,” Ms. Cirocco said. “You have all these women who become your friends, and you are personally invested in their success. Everyone wants everyone to get out, to go on to have a good healthy life.”

If the level of support found at Televerde were found elsewhere, Ms. Klaus said, it would solve a lot of problems.

“The time has come,” she said, “for us to really deal with this relationship that women have to women, because it truly is preventing us from being as successful in the workplace as we want to be and should be.